Chris Clark, under the mononym "Clark", provides the score to the 2019 psychological horror film starring Miles Robbins and Patrick Schwarzenegger. The soundtrack is described as Bernard Herrmann scoring a Hitchcock movie with having an industrial sound to it. Clark utilizes string quartets and juxtaposes them sonic elements, creating both a classical and contemporary sound that brings the listener into the unhinged mind of Luke and the manifestation of Daniel. The soundtrack was released digitally on December 6th, along with a vinyl release by Deutsche Grammophon.

Music supervisor Dan Wilcox, who has worked in films such as The Prodigy and The Edge of Seventeen, has handpicked a number of industrial and electronic music by Boy Harsher, JPEGMAFIA, BULKWORTH, Pheeyownah and Miss Red. 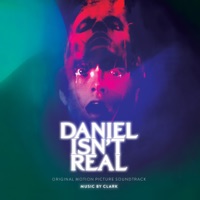 Daniel Isn’t Real (Original Motion Picture Soundtrack) • 17 songs
itunesamazon
Agh! No one has posted yet. Would you like to be the first?
A troubled college freshman, Luke, suffers a violent family trauma and resurrects his childhood imaginary friend Daniel to help him cope.
Clark
Dan Wilcox
Mario Calderon
20.6k
admin21k
27 songs • 0 scenes
iMDBTMDB