Color Out of Space

The soundtrack to the classic H.P. Lovecraft adaptation of the same name is scored by Grammy Award-winning saxophonist and multi-instrumentalist, song writer and composer Colin Stetson (Hereditary).

Music Supervisor Dan Wilcox (Daniel Isn't Real, The Prodigy) has handpicked a number of death metal and black metal songs by Wormwitch, Burzum, Alter of Plagues, Mayhem as well as music by Su Na, The Cashmeres, and Ultimate Spinach. 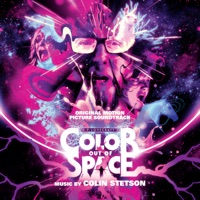 Color Out of Space (Original Motion Picture Soundtrack) • 13 songs
itunesamazon
Agh! No one has posted yet. Would you like to be the first?
A secluded farm is struck by a strange meteorite which has apocalyptic consequences for the family living there and possibly the world.
Colin Stetson
Dan Wilcox
tomm098
167.3k
admin0.2m
13 songs • 0 scenes
Mario Calderon
20.5k
admin20k
7 songs • 0 scenes
iMDBTMDB